A Beginners Guide to Rock Climbing 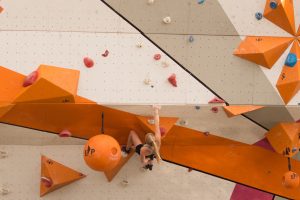 In recent years, the popularity of rock climbing has been rising exponentially. In the last three years, there have been around 100 new gyms that specialise in rock climbing that have opened their doors in the nation, not to mention that the participation in outdoor climbing sports has risen by 20.3%. What’s more, with each passing day around 1,500 people are trying climbing for the first time ever at places like Craggy Island.

If you are thinking of starting climbing as a hobby or sport, there are couple of things that you should understand. It is also important to note that you will also need to acquire some new gear. Below is a beginner’s guide to climbing.

According to Hans Florine, who is the manager of the Diablo Rock Gym located in Concord, California and a professional climber, when it comes to climbing, hands are everything. To last fifteen minutes in your first climbing venture, you should consider buying a hand gripper. To strengthen your hand muscles try squeezing 50 reps with each hand on a daily basis.

You should also strengthen your core as it does much of the work in keeping your body as close as possible to the wall when climbing. Hans Florine advises that one includes bridges and planks, including single leg variations as well as single leg circles in the gym routine to strengthen the body core.

For your first time climbing, you are more likely to be successful if you have a lot of mobility and flexibility. To achieve this, you can work the hips by sitting in the pigeon pose and butterfly pose according to Hans Florine. If you have wide hips, you will be better able to generate momentum from your lower body while at the same time reaching even the toughest footholds.

Do not forget to do some cardio exercises. One of the reasons why most climbers get winded halfway is that they lack a cardio base. Ideally, you should strive to build a strong cardio base before attempting climbing or during the early stages of your training.

After reviewing the various types of climbing sports and settling on one, the next thing should be learning some of the lingo. Understanding the jargon used in climbing will make the learning experience easier and at the same time help you in honing your skills. Although there is a lot of jargon used in the climbing world, Hans Florine advises that you learn some of the terms below to better understand the climbing and give you a better understanding of the sport.

• Beta – This refers to helpful information that is given by a seasoned route climber about a particular route. When starting your climbing venture, you should strive to be a beta consumer from the pros.

• Bomber – This means indestructible or secure. This term can be used to refer to the gear, hold or even a type of rock.

• Choss – This is a general term for loose and crumbly rocks, vegetation, dirt or anything on a route that is not stable enough to hold. This term is sometimes used by climbers as an excuse for fumbling or a fall during climbing.

• Gripped – This refers to a mental state of fear during a climb perhaps due to presence of choss, difficulty of a route or exposure.

• Pumped – This refers to when the forearms swell too much with lactic acid that the climber cannot grip properly. It often occurs at the end of a particularly difficult climb and can be used as a source of pride after a difficult climb or frustration when you cannot continue any longer without first taking a break.

When it comes to climbing, feet placement is more important than hand placement. According to Hillary Harris a veteran climber and proprietor of Evo Rock & Fitness in Colorado, good climbers usually spend 80% of their time in a climb looking at their feet. Climbers who are experienced also tend to climb with their arms straight.

The best way to learn climbing is to demonstrate basic climbing manners. Some of the things that you should avoid include:

• Do not start climbing a route at the same time as the person climbing on the route next to yours. Though the routes may intersect, climbers usually need space on the wall. Before beginning your climb, let the other climber get at least a third of their route.

• Do not put strain on the rope. In case of a fall during climbing, the rope usually acts a lifesaver. As such, it is best to avoid wearing it down quickly. Though this may not be a big deal when you are climbing outdoors, it is a habit that you want to avoid.