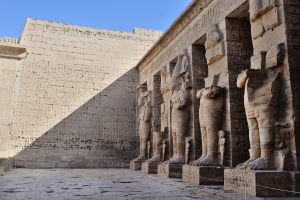 If you’re seeking a romantic, relaxing visit to Ancient Egypt, look no further. There’s no better way to visit Ancient Egypt than a luxury Nile Cruise, courtesy of Egypt Escapes. Ancient Egyptians lived and worked along the iconic Nile. For this reason, the Pharaohs built most of their temples as well as their tombs on or near the banks of the river. There is so much to see on a luxury Nile river cruise.

If you’re preparing to go on a cruise, or if you’re even considering a cruise, you’ll want to know a few things. There are some ideal destinations that you can visit. Start your cruise from Northern Cairo, or consider a reverse journey from the south and start out at Aswan or Luxor. Here we’ll follow the current of the river and begin our tour extravaganza from beautiful Aswan. Aswan is the southernmost frontier of our visit to Ancient Egypt. In our second post, we’ll focus on Luxor and follow up with Cairo and the iconic landmarks that make Cairo so special.

Aswan: The Jewel of the Nile

As the southernmost frontier in Ancient Egypt, Aswan is absolutely beautiful. It cuts through golden deserts and flows in and around the emerald islands. It was originally known as Swen or perhaps Swenet. As the gateway to Africa, it was representative of the crossroads for trade. Here, granite was quarried for the monuments as well as the temple construction. It’s an ideal starting point and the Nubian culture is very relaxing and quite unlike the hustle and bustle of the tourist destinations of Luxor or the more frenetic activities of Cairo. There are many great attractions including:

This is an ancient temple. It’s not very easy to get to, but it’s well worth the effort. Designed and created during the reign of Rameses II, this temple has two chambers. These two chambers are guarded by four colossal statues of none other than Rameses himself. This awe-inspiring temple was carved into a rock face originally. It took over 20 years to be created. Amazingly, the temple was relocated in the 1962 in order to help protect it from erosion due to the construction of the Aswan High Dam.

Temple of Isis at Philae

This has long been considered to be the last of the temples constructed in Classic Egyptian style. This temple was also relocated by UNESCO just prior to the construction of the Aswan High Dam. Visitors can marvel at hieroglyphics and the soaring columns. At night, there are light and sound shows.

This is a rather unusual double temple. It’s dedicated to crocodile god Sobek and falcon god Haroeris. The structure is soaring and has perfect symmetry and the multiple chambers would have been halls, temples, sanctuaries or courts. Take a stroll under the colonnades and transport your mind to Ancient Egypt.

Temple of Horus at Edfu

Located on the West Bank of the river, this temple is located approximately 60km north of our destination of Aswan. Temple of Horus is well preserved and perhaps the best of all of the ancient monuments. This temple is dedicated to the son of Osiris and Isis, Horus. As a Ptolemaic temple, it has followed in the classic structure with courts, statues, walls that are adorned with hieroglyphics, and a variety of chambers. It’s the second largest of the temples located in Egypt. It’s very popular and offers perhaps the most authentic of experiences in Ancient Egyptian life.